*UPDATE — 01-16-2017* I felt like I should provide a nearly 5 year update.  First of all, I cant believe it has been almost 5 years.  Second, these are still the greatest tire I have ever owned.  My brother and a co-worker have purchased the Toyo RT, so we hope to have a review on those tires soon.  I upgraded to a newer 4Runner in 2015 that is heavier and AWD, so I expected these tires to wear out fast, but these things continue to impress.  They have worn evenly, they have only ever had minor chipping on the tread blocks…most of all they still get after it.  We have had a pretty intense winter, and their snow and ice traction is impressive every time I venture out.  Again, in full disclosure, this is still a third vehicle, and I run Toyo HT’s in the summer to avoid unnecessary ware and tare on these tires.  I still love these things, and they still have a ton of life left.

*UPDATE — 01-01-2014*I just wanted to pop in and say that these puppies are still holding strong.  While I only have about 8000 miles on them, they still look brand new.  I have done everything I hoped to accomplish with these but rock crawl (like really get after it) and they are still exceeding my expectations.  Love em.

*UPDATE — 01-26-2013*We have had some serious weather here the past few weeks, and I have finally had a chance to test these bad boys out in fresh/fluffy snow (8″ or so), compacted snow, and an ice storm.

First things first, these things are beyond good.  I have mostly been driving my Subaru during this weather, and giving my wife my 4runner.  My Subaru is good, though it is anything but confidence inspiring.  My first time driving my rig in the snow, I was fascinated by how good it really was.  I mean forward traction is not super in anything if you get too much gas, and this is no exception, but if you throw it in 4WD, it climbed up a nearly 10% grade, that was a solid sheet of ice without incident.
The most impressive thing is they STOP!!!  These tires STOP in fluffy snow, compacted snow, and solid sheets of ice *mostly*.  If you get carried away, you are in trouble, but I could drive this like it was dry pavement, with the exception of emergency stopping.  But as long as you are not locked up, these things will stop.
Impressed doesn’t begin to describe it, and I drove a 2010 tundra with the Nitto MT’s on it just to compare, and while the full MT’s are good, they didn’t hook up quite as well on compacted snow or ice.  I am not sure if that is because that truck is so much heavier,  but the driving experience was not quite as comfortable.  So, bad weather, these things are pretty damn awesome.

*UPDATE — 11-16-2012*Well, I finally got to take the tires onto some gravel, mud, washboard roads, steep hills and rocks!  Hunting a few weeks ago, I found all of these things in very short order, and to give you all the most honest review possible, I decided to do a bit of extra driving to see what story the tires had for me.

I have a few  thousand miles on these puppies at this point (it doesn’t get driven much) and can tell you so far, they have yet to let me down.  One area I was a bit surprised by was on thick washboards.  When the woops were 4″ wide, and about 4″ apart, let me tell you, those E rated LT tires on a small, light 4Runner can get a bit sketchy!  The backs hit the woops so hard that the truck went a bit sideways at times!  Pop her in 4H though, and that is quickly a non issue!

In the mud, they did not clear exactly like a true MT, but they cleared more than adequately enough without even getting into the throttle!  They pulled me right out of  the mud puddle test, and right up a bunch of muddy hills.  I was also impressed by the ability to take rocks on the flats, and crawl big rocks up a hill, the rock traction is excellent, and it pulled me up a super steep and rocky hill in 4H without a bit of excitement.  A couple times, my passenger looked at me and said “you don’t really want to go in there do you”…or, “you don’t really want to go up that do you?”  I just smiled and said “we still have 4L, just incase…..and a shovel.”

No chips, no gouges (though I hit a jagged rock pretty hard…no problem…gulp) excellent wear, they would look brand new, if I would wash them!

*UPDATE — 10-17-2012* Good news!  I needed to pick up 1 ton of wood pellets since winter is creeping in slowly, and figured with my new E rated tires and my HD springs, why not take the whole ton!  Last year, on the AST II’s, I took a half ton and noticed some serious tire bulge!  With the ST Maxx’s, no sweat, they didnt even notice anything was going.  This is yet another positive to having too heavy duty of a tire on my light duty SUV.  While I am still hoping for some off road action, it may be a while yet.  I also drove them in the rain in the sudden downpour on Monday, and they were very good.  I hit one pool of standing water, and it mowed right through it!  Still working super!

*UPDATE — 10-8-2012* Good news!  I pulled my boat with the new tires on yesterday for the first time, and other than having to reconfigure my hitch from the additional height, there was no instability or other differences with the new tires!  This is super, as some of the reviews said trailering was sketchy on these tires, and I can say for my setup, that simply is not the case.  One point of interest, if you eject a rock from your tires going 55 MPH, it will hit your boat and make you very sad.  I may have to consider some larger mud flaps, or taking time to remove the rocks from my tires after I depart the gravel road next time…..

*Main Post* Whew!  What a week!  I realize there has been some silence on this thing, but work has been busy and when I get home in the evening, I have not had any time to write!  This week brought about some things worth writing about, including maybe some fishing reel repair, fishing rod shopping, dove season closer, but I will instead be writing about TIRES!

On Monday, my glorious tires arrived with UPS from my friends at DiscountTire who did the price match for me.  Now came the business of mounting and balance.  I have mine taken care of by a friend, but I called around, and it seems that if you have a WalMart near you or a Costco membership, those are your best bets for mounting internet purchased tires.  Everyone else charges an arm and a leg.

So I rolled out the tires to visit the rig and do some size comparisons between the 285 70 17 Cooper ST Maxx and the 31×10.50 Cooper AST II.  I was not really expecting them to be quite so large, but I am not mad about it in the least!  As you can see, there is some size variance there!

Here is the last before picture taken of the rig with the old muddy Cooper AST II 31×10.50’s!

Truth be told, I will probably run the AST’s for next summer as they still have enough meat on them for summer driving, and I can prolong the life of my aggressive tires by not allowing them to sit in the sun.  I also clip a few miles pulling my boat around, so I will end up with those AST’s on there a few more times!

Today was the big day for mounting and balancing (remember that lack of time I referenced).  I received a call around 8:30 letting me know they were done, and we set out on a family gathering to grab them.  I did not have the tire store mount them on the rig as I knew I needed to do some cleanup once I got the old wheels off. 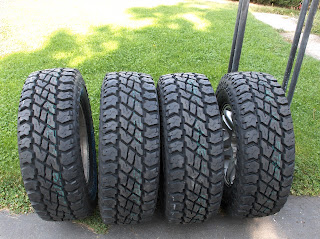 Well hello Cooper ST MAXX’s mounted up looking sharp.  Now I can get a good look at the tread and how it would ride with air in them.  One thing I knew I was getting into was the extra weight that I would be adding.  Let me tell you, the tires by them selves are almost 60 LB’s, and I would guess the wheels were at least 25 LB’s also! 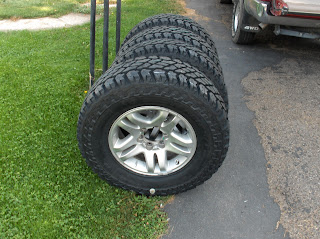 They sure do look good though!  I am so happy with my wheel selection!!  The good news is that those of you who know me appreciate that the extra weight of these tires will not be a problem for my special 4Runner, and actually, in doing some rough calculations, it should make my speedo almost correct!  Great news all around, and they are sure sharp looking! 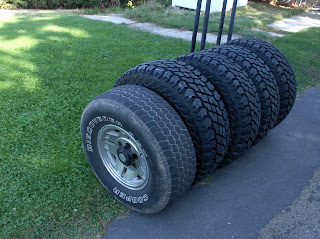 Off came the first of the olds, the passenger front. 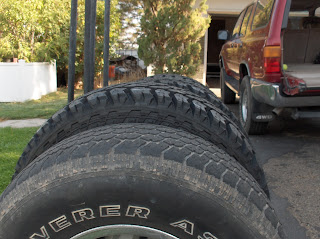 Now that they are both off the rig, you can see how much of a size difference there really is!

Due to the inability to run the front center caps without some serious modification to the caps on my auto disconnecting differential 4runner (the hubs stick out WAY too far) I decided I would do some cleanup on my front hubs for two reasons, the new wheels are much more open, so you will be able to see the brake caliper, and there wont be a center cap for a while.

Here is a quick gallery of the fun that took place:

I am excited to present the finished product!! 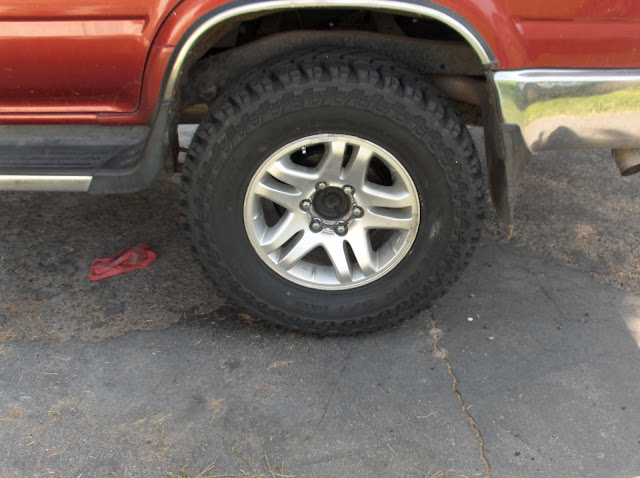 Then the rears!  I forgot my center caps at the tire store, they are on now.

So, first things first.  I have a 2″ body lift from 4Crawler that was required for my engine swap, but my torsion bars are ALL the way DOWN, removing any suspension lift from the front and I have MOOG heavy duty stock height replacement springs in the rear.  I do have some binding when my steering wheel is at either lock where the tire catches the running board plastic end cap.  There is NO fitment issue in the rear.

I took it for a drive, and while it does have SOME big tire hum, it is not terrible.  The overall road noise has been reduced (because the other tires were getting so bald, more contact patch in constant contact with the road) but the difference is negligible.  I did talk about in my tire selection post that the ride might be stiffer as this is a Light Truck (LT) E rated tired.  I will say that small bumps are more noticeable, but not uncomfortable or weird in any way.

My initial impressions are excellent.  They do not have the pulses when stopping like a full MT tire, and while the new combo is HEAVY, it is hardly noticeable with my engine.  I will say I would be slightly concerned with a factory V6 given our hilly terrain while pulling a boat, etc.

I am trying to think up an excuse to get these things dirty, I will hopefully accomplish that soon and take a camera along with me.  Next up, eBay center caps I can cut up for the front!  I will keep you all posted on my thoughts and feelings about these bad boys!